Correct me if I’m wrong but Norwich City winning against the reigning Premier League champions has raised so many questions over the past week. Some fans believe the league is definitely going to Liverpool (after 5 games….reallyyy!!!) and many say Manchester City have finally run out of steam. To be fair, there are two factors that will affect City this season, firstly the loss of Kompany through retirement and the Laporte injury.

I’ve said it since the start of the season that Kompany will be sorely missed and no direspect to Stones and Otamendi but they’re not made of the same cloth. Kompany is a different calibre. However, don’t think for a second that City will just give up after a loss or a 5 point deficit….if you believe this then you’re greatly mistaken. Let’s not forget Liverpool were 9 points clear at a stage last season and still ended the season as runners up (it’s far from over, but I’m still backing the REDS though hehe!!).

I like how Klopp came out and still declared Manchester City the best team in the country. Is he right or just playing mind games?  I’ll leave that to the masses to consider. What’s definitely factual is the surprises and entertainment value the premiership brings on a weekly basis. You cannot deny the drama, if it was a show it would win the best soap opera year in year out (I’d award VAR best supporting actor).

Right, so on Saturday Norwich did the unimaginable and gave City a spanking. Rather than being negative, I believe Norwich actually played well and deserve every credit for their achievements. The game itself was absolutely thrilling and packed with end to end action with both teams gun-ho on attack.

Norwich went ahead through Mclean on the 18th minute before Cantwell added a second on the 28th minute after great work from Pukki. Man City didn’t seem affected by the score and carried on attacking until finally rewarded through Club all time top scorer, Aguero on the 45th minute.

One thing you cannot do is rule out Man City and after the break you felt they would bounce back. Unfortunately for Guardiola, Norwich striker Pukki had other ideas and the Finland international (who has made a great start to the campaign by the way) made it 3-1 in the 50th minute sending the home supporters and perhaps some Scousers around the country into jubilation. City pulled one back in the 88th minute through Rodri and by the time De Bruyne and Mahrez got on the pitch it was all too late.

Meanwhile, Liverpool carried on impressing with another fine display after easily breaking Newcastle with 3 goals to 1. Red hot Mane was in fine form and grabbed a brace whilst golden boy Mo Salah scored the third in the 72nd minute. Firmino deserves a special mention because some of his touches during the game was unbelievable (took me back to the Barca days of Ronaldinho…..ok am reaching, just a tad peeps just a tad).

The mighty Spurs were also victorious in their London derby game against Crystal Palace with a 4-0 demolition of the South London Outfit. Benteke made an appearance for Palace but looks like a shadow of his former self (I’ve seen toothless PUB strikers hit the ball harder).  Chelsea with all their transfer embargo are relying heavily on their youngsters and Tammy Abraham and co are living up to the expectation. They comfortably dispatched Wolves away, winning the game 5-2 and Abraham grabbing a hat trick. 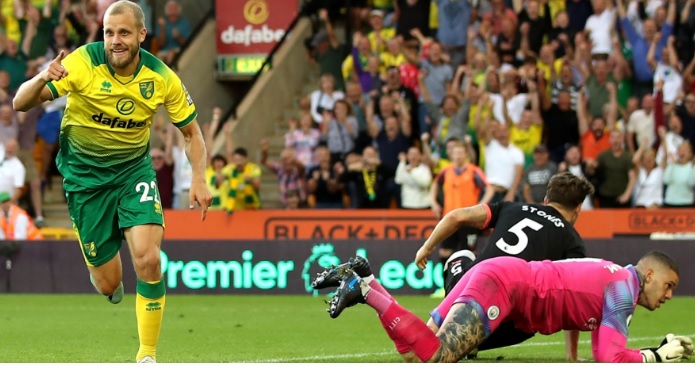