Firstly happy new year to one and all. It’s been a minute. Hope you had a great one and enjoyed the festivities. I’m still trying to get through the left overs (trust me there’s plenty to eat). Not sure how much more turkey sandwiches I can stomach but I’ll give it a good go.

It certainly feels like a lot has transpired over the past few weeks. Ancelotti’s now the Manager of Eveton and his presence has begun to influence the players judging by recent results to lift the spirit of Evertonians (it’s been a while since they had a grade A manager, if ever). Moyes is back at West Ham after the club sacked Pellegrini due to a poor run of results. I can’t help but wonder whether David Moyes will survive till the end of the season. His track record in recent memory is nothing to write home about.

Nigel Pearson is back in the Premier League having taken over the reigns at Watford. The ex Leicester Manager was given the top job at Watford with a clear objective of keeping the Hornets in the league come May. Pearson (if my memory serves me well) was sacked as Leicester’s manager before Claudio Ranieri took over and the rest is history as they say. Of all the managerial appointments, Arsenal’s acquisition of former player Mikel Arteta came as the biggest surprise in my opinion.

It is well documented that Arteta had ambitions of one day becoming a manager/head coach having been Pep Guardiola’s understudy at Manchester City. However, his appointment at Arsenal can be viewed as being a little to early in his managerial career. One thing is certain and that is the Arsenal have taken in the hope of getting their season back on track and to future glory.

Is Arteta the man to lead Arsenal forward? A question that can only be answered by results. His first game in charge didn’t quite go according to plan in the London derby game against Chelsea. The Gunners threw away a possible and well needed 3 points in the last ten minutes of the match and lost 2-1 at the Emirates. Some say Arsenal fans can be very delusional and at times that statement does ring truth. Clearly Arteta has some work to do provided he is given sufficient time to do so.

Fast forward 3 days and into the new year. Arteta’s second game in charge is against old foes Manchester United (who by the way seem to have found their rhythm). The home side had one thing in mind, attack the United back line at all cost and they did just that. Mesut Ozil seems to have been re-instated into the first team and his influence when on song is second to none. However it was Arsenal’s record signing Pepe who stole the show. The midfielder was a constant threat all game long and full of creative imagination.

He found the net in the first 8 minutes of the match after Kolasonic pulled the ball back for Pepe to neatly finish sending the United keeper the wrong way. Arsenal looked very impressive in the opening stages of the match and continued to mount assault on Manchester United. Pepe could have added a second in the 37th minute after striking the ball from 25 yards only to be denied by the post. Sokratis made it 2 nil to the Arsenal slotting in a loose ball from a Pepe corner.

All in all this was a much better performance from Arsenal and the atmosphere at the Emirates was electric. The supporters and fans alike were full of singing and cheers not seen at the Emirates for almost a decade hahaha!! If anything, Arteta’s appointment may have breathed new energy into the Gunners and he will need all the tools he has acquired from Guardiola to steer Arsenal in the right direction. Personally, I was enjoying seeing and looking forward to the gunners in a relegation dog fight but Arteta may have yet scarpered those plans for now at least.

The Premier League is back in full effect (not that it went anywhere) and the January window is also open so you know there’ll be plenty of action taking place. Liverpool are formidable and are certain to be crowned champions. Spurs seem to be faltering under Mourinho but I’m sure will bounce back in the new year and Leicester will probably be in the champions league next season. Lets see what the new year brings, happy new year once again. 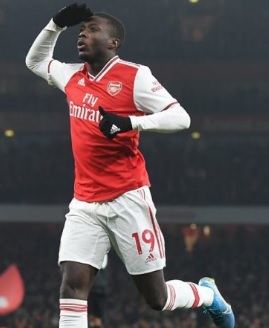