With the league now in full flow and players shaking off the summer rust, another weekend of action and surprises has past us by. Whilst we can focus on teams at the top of the table, it is the bottom end that I find intriguing. Played 4, Won 0, Drew 0, Lost 4. West Ham’s statistics reflect the poor start they have made to the Campaign. Call me an optimist or a dreamer but I actually fancied West Ham to be right in the mix at the top end this season (I got that wrong didn’t I).

The London Stadium played host to the game against Wolves and with the home advantage, expectations were high for the Hammers to get a result. Unfortunately for their devoted supporters things did not go accordingly as Wolves left London with a 1-0 victory thanks to a goal from record signing Traore. Reports indicate that at least for now the board are still sticking with Pellegrini although if things don’t improve surely he may be the first managerial casualty.

Watford are now 4 in 4 after securing a well deserved 3 points against Spurs. They’ve managed to maintain a clean streak and did so over one of the premier league’s most consistent teams. Watford went a goal behind after good work from Moura but showed great resilience as they powered back with two headers from captain Troy Deeney and Cathcart respectively. The game ended 2-1 to give Watford their 4th victory in a row (not even I was alive when they last did that).

Liverpool and Chelsea are the other teams that are matching Watford’s 100% start to the new campaign with wins against Leicester (Liverpool) and Bournemouth (Chelsea) respectively.  Man Utd appear to have bounced back from that defeat to Spurs as they made light work of Burnley. Lukaku takes the plaudits as his two goals ensured a 2-0 victory for the Red Devils (keeps Mourinho happy and quiet for now). Neighbours City also registered a 2-1 win with a convincing display at home to Newcastle. 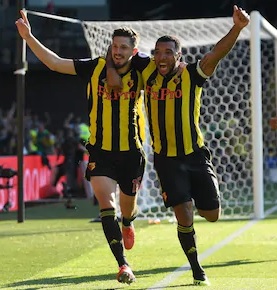