Man United back to best

Manchester United registered their 6th win on the bounce in their win against Spurs away. This victory makes manager Solskjaer the first United manager to achieve this feat. Not even the great Ferguson (with all his accolades) did this. Does that make Solskjaer the greatest Man Utd manager of all time? NO!!!!

In a game full of energy and imagination, united took the lead after Rashford broke the deadlock on the 44th minute clinically finishing past the Tottenham keeper. Pogba’s through ball split the Spurs defence wide open before Rashford did the rest (such a cool head for one so young).

The game was end to end (no dull moments) with Tottenham having a stronger second half. However, though they created plenty of opportunities, the United goalkeeper De Gea wasn’t going to be beaten. He made numerous saves that virtually gained his team 3 points. Solskjaer will get the plaudits but De Gea was definitely the hero between the two sides.

The win means Manchester United are now level on points with Arsenal and well within reach of the top four (Jose who??!!! hahahaha!!) The Gunners were beaten 1-0 by West Ham in the London derby thanks to a goal by Rice which means the Hammers sit 9th in the table.

Elsewhere,  there were wins for the top two sides in the League as Manchester City dispatched of Wolves 3-0 (De Jesus 2, Coady OG). City put in a masterful performance and totally dominated the game, proving far too superior for Wolves. Liverpool on the other hand managed a 1-0 victory away to Brighton to tighten their grip at the summit.  Liverpool weren’t at their best but to be champions, the most important thing is the accumulated 3 points.

Rest of the results: 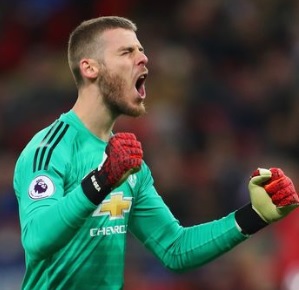 Man of the hour!!