Saturday afternoon saw the return of the domestic competition after the international break and what better way to kick the weekend off than a clash between Chelsea and Manchester United at Stamford Bridge. Mourinho took his side back to his old stomping ground hoping to silence the form of the brilliant magician Hazard.

Chelsea dominated the majority of the first half and were rewarded after a thundering header by Rudiger in the 21st minute from a set piece put the home side ahead (Pogba could have done better with the marking to be fair). Chelsea thoroughly deserved their lead and controlled this stage of the game.

However, the second half brought the best out of United (not sure what Jose said to them at half time but whatever it was it definitely worked). The team looked a lot more organised and full of purpose. Anthony Martial, who seems to be getting a lot more starts recently, bagged a brace for united to put them 2 goals ahead.

All was looking well for United until Barkley equalised in injury time to earn the home side a hard fought draw with the match ending 2-2. It was at this moment when a member of the Chelsea coaching staff thought it would be a good idea to celebrate in-front of the special one thus provoking a reaction.

Meanwhile Man City continued to impress after a 5 goal demolition of Burnley. The team were relentless in-front of goal and took their chances. There were goals from Aguero, B Silva, Fernadinho, Mahrez and Sane not to mention a cameo appearance from Kevin De Bruyne after an injury layoff. Burnley simply were outclassed and stood no chance in hell of mounting any type of challenge (it was a one sided affair).

City now sit at the top of the league and may prove very hard to overtake. Their closest rival Liverpool also kept up the pace with a 1-0 victory away to Huddersfield. In the London derby game between Tottenham and West Ham, Lamela’s header proved to be the decider giving spurs a 1-0 win in a less than entertaining game of football. Also, Cardiff City beat Fulham 4-2 to lift them out of the relegation zone this season. 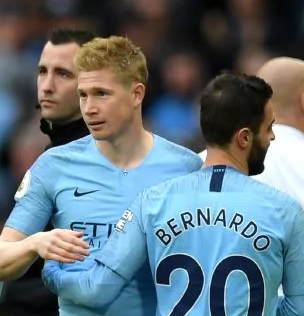