Gunning in the right direction

Well, well, well….looks like a certain London club have finally found the right balls for their cannon (It’s obviously not Tottenham). The Gunners are now unbeaten in their last 9 games. I know its very hard to believe considering just a few months ago they were almost in the relegation zone and now seem to have turned things around.

Not only are they unbeaten in their last 9 competitive games but they’ve also won their last 3 games in all competitions. They beat Newcastle 4-0 in the league, beat Olympiacos 1-0 in Thursday night football, sorry Europa League and beat Everton at home on Sunday winning 3-2. Arsenal supporters all over the globe must be loving this at the minute (small victories hehehe!!).

Mikel Arteta seems to now be getting the best out of his players. Yes, it’s early days yet but you have to give everyone at Arsenal credit. Don’t get me wrong, I enjoyed seeing them sweat in the past months (yes I did), however credit has to be given when due. So what’s changed? Are the players buying into Arteta’s philosophy? Well, the performances and results would suggest this to be the case.

There seems to be a lot more smiles at the Emirates these days and that can only be down to the players embracing the Managers style and implementing his new ideas. Players people thought couldn’t care less about the club now seem to be working hard and putting in a shift. The identity of the Arsenal style may have been reinvigorated by Arteta.

Going back to the game on Sunday, Everton are no slouches and have also enjoyed some good fortune thanks to the stewardship of manager Carlo Ancelotti. I would have bet money that Everton would get a result at the Emirates but what I didn’t expect was that Arsenal performance. Everton went ahead through Calvert-Lewin in the first minute of the game before Nketiah equalised for Arsenal in the 27th minute. Aubameyang then put Arsenal ahead with an excellent finish in the 33rd minute. Richarlison pulled one back for Everton in the closing stages of the first half.

It’s fair to say the first half was jam packed full of action and the second half carried on where the first half left off. Aubameyang scored the 3rd goal for Arsenal at the start of the second half and the goal resulted in Arsenal earning a well deserved win over Everton. Arsenal will do well to hang on to Aubameyang and hope that he’s not tempted away by the bigger and more glamorous European clubs (money talks baby).

Meanwhile…..Manchester United enjoyed a 3-0 win over Watford pushing them closer to the top four. If Ole can get United into the champions league next season, then the thought of him getting sacked would surely evaporate. No?….welllll, only time will tell. Liverpool made it 26 wins in 27 matches by defeating West Ham 3-2 (can we just give them the title already).

In the London derby game between Chelsea and Spurs, Chelsea won the game 2-1. Spurs are in desperate need of a striker and it really shows. Some say they should have beaten Chelsea but it’s tough when your two best players are out on long term injuries. I’m sure the special one will work some magic or Spurs can kiss the top four spot goodbye. 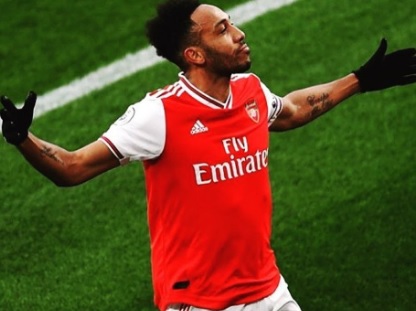 2 thoughts on “HAVE ARSENAL FOUND THEIR MOJO”