The one thing I will acknowledge are the travelling Tottenham fans who sang their heart out for the club they love amidst the poor performance from the players. So credit to them for showing fan loyalty even though the players didn’t deserve any of it. Credit also to Redbull Leipzig for their dominance over the two legs as they progressed to the quarter finals of the champions league.

What has gone wrong for Spurs in the past weeks? Their loss of Son and Kane and other senior players has certainly hampered their season, no doubt about it. New signing Bergwijn has also been added to the injury list hence his omission from the game against Leipzig. You have to feel for Mourinho, not even the “self special one” had the answer as Tottenham were outclassed and out performed by the lesser known side.

The performance over the two legs has to be one of the worst I have seen from a Spurs side. There was no leadership, the players had no heart or believe and it showed in their display. One could argue that their lack of attacking option may have added to their woes. However, the midfield was awful and the defence has been a shambles for months, leaking goals at will. Spurs have only kept a clean sheet in 3 games all season and that is just unacceptable for a club that has ambitions of one day being at the submit of football (at this rate they’ll be playing Sunday league football down at Hackney Marshes).

Tottenham were well beaten by Leipzig, after Sabitzer put in a captain’s performance by leading his team to glory. The Austrian international gave the home side the lead in the 10th minute after striking the ball into the bottom corner from just outside the box. The Spurs goalkeeper Lloris could have and should have done better to keep the ball out. There was only ever going to be one outcome in this match and I’m sure there were many Spurs fans hoping that the team would show some of the courage they displayed in last year’s campaign but it wasn’t to be.

Sabitzer was at it again and struck to put Leipzig 2 goals up in the 20th minute of the first half before Forsberg wrapped things up with a tap in, in the 87th minute of match. The home supporters were full of joy as cheers echoed throughout the stadium, and you cannot blame them. Their team have just totally dominated and knocked out last year’s finalists so massive respect and congratulations to them. Are they good enough to go all the way? I don’t think so, but they can be proud of their achievements.

As for Tottenham and Mourinho, the whole season is an absolute right-off. I guess there will be questions asked back in North London and new strategies will be implemented in the summer. But for now Spurs’s season is over. Are they good enough to secure a top four finish? Definitely not, if their current form is anything to go by. They clearly have the players and squad to do great things and and sure come next season the mighty mighty Spurs will go marching in. It won’t surprise me if Mourinho leads them to winning the league and a cup next year (I’m not saying it will happen, but I won’t be surprised if it does). 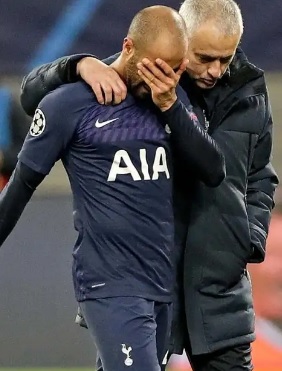